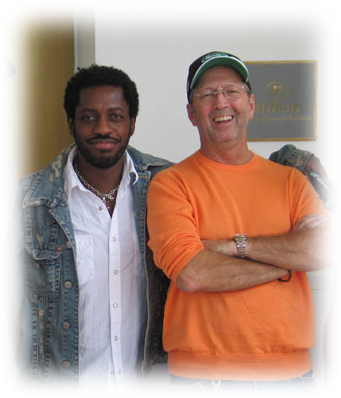 Today was the day I met Eric Clapton…yeah, it was a REALLY good day. Rewind to the night before: Clapton and his band were en fuego as Dan Patrick used to say on ESPN. They rocked downtown St. Louis so hard the Gateway Arch was movin’ to the beat. I was supposed to interview drummer Steven Jordan in St. Louis, but the band’s travel plans changed, which meant I had to make my own travel plans for Ohio the following day.

I had a great interview with Jordan, one of the best drummers around. If you want to be impressed, Google “Steve Jordan” and check out the parade of world class performers he’s played with. In terms of “Johnnie Be Good”, Jordan was the drummer for the landmark documentary “Hail! Hail! Rock ‘N’ Roll” and he later performed and co-wrote a song on Johnnie’s “Johnnie B. Bad” recording session. Jordan’s respect for Johnnie Johnson’s impact on rock and roll quickly became apparent during his on-camera interview. “I hadn’t heard much about Johnnie Johnson but it all made sense the first time I played with him. I could not believe not only what I was hearing, but how it felt, and then having the privilege of playing with him and getting that feeling first hand. That doesn’t happen very often. Playing that style of music and playing it with a person who was actually there for it’s formation.”I got to hang out with Jordan for about 90 minutes. He checked out the documentary trailer and complimented it. It was a very enjoyable afternoon, even though I was cutting it close for my flight back to St. Louis. He waited with me while the cab driver loaded my gear. We heard a voice and both of us turned around. Suddenly I was face to face with Eric Clapton. Welcome to my out of body experience! I had been trying to contact Clapton for an interview for over two years. Steve made the introduction and we shook hands. I tried not to babble incoherently. I complimented him on his amazing show the night before and we chatted a bit about Johnnie. If you want to see music giants at the top of their game, check out the “24 Nights” dvd from the early 90’s when Eric, Johnnie, Buddy Guy and Robert Cray played together at Royal Albert Hall in London. Add it to your collection ASAP! I told Eric I hoped we could sit down and talk about Johnnie someday and he said….. you’ll have to come see the documentary to figure out what he said, but it looks really good. I check my watch. It’s 3:00 p.m. and my flight leaves at 3:50. I don’t want to say goodbye, but it’s time. I get in the cab and immediately jump back out and start searching for my camera in the trunk of the cab, realizing I’m probably looking a little frantic to Eric and his band members, who were kind enough to pose for a picture which is in the photo gallery. I was so jazzed from the concert and then meeting THE MAN that I could have flown back to St. Louis under my own power. Wow! Art HollidayDirector, JOHNNIE BE GOOD