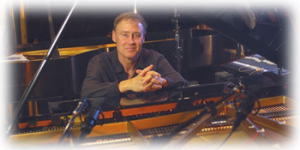 From one keyboardist to another

It’s less than two hours before Bruce Hornsby’s “Live on the Levee” riverfront performance in St. Louis. He sat down, clipped his microphone on, asked me if I was rolling, and then sang a quick tribute to Johnnie Johnson, one keyboard master saluting another.Hornsby thought enough of Johnnie to take part in a recording project in 2003.

He traded piano solos and shared vocals on “Every Day I Have the Blues”. Bonnie Raitt sang background vocals. That recording project also includes John Sebastian and Johnny Rivers. It remains unreleased to the public and Hornsby said he had never heard the final version of “Every Day I Have the Blues”, so I promised to send him a copy.”Johnnie was definitely a big part of that Chuck Berry soup and should also be given great credit for that. I was so happy when Johnnie was inducted into the Rock and Roll Hall of Fame because to me he was the quintessential rock and roll piano player. He swung hard in his playing, had a great groove and to me, Johnnie and Fats Domino had a certain feel in their music that to me was the archetype. Without his music, we won’t be the same.”Bruce Hornsby is a singer, pianist, accordion player, and songwriter. Fans of Hornsby know he draws frequently from classical, jazz, bluegrass, folk, Motown, rock, and blues. Hornsby’s recordings have been recognized on a number of occasions with industry awards, including the Best New Artist Grammy for 1986 with Bruce Hornsby and the Range, the Best Bluegrass Recording Grammy in 1989, and the Best Pop Instrumental Grammy in 1993.Hornsby recalled he met Johnnie when JJ was playing with Ratdog, Bob Weir’s band in the late 90’s. Johnnie sat in with Hornsby’s band during a visit to St. Louis. “He was always such a warm spirit, such a great person. I love his playing and his stories. I always loved being around him.”Thanks to Missy Slay of Celebrate St. Louis for getting me in touch with Hornsby’s people, and thanks to Bridget Nolan and Hornsby road manager Peter Banta for hooking me up with the interview.I am one week away from a fundraising concert at the Argosy Casino in Alton, IL. I know Dona Oxford and the Johnnie Johnson Band are going to rock the room so I’m looking forward to some great music. Also looking forward to sharing some of the stories of my journey, tracking down all the amazing artists who were touched by Johnnie Johnson. If you’re in the St. Louis area, please come out and support my efforts to tell JJ’s life story. Tickets are $20.00. Call 1-800-711-4263.The journey continues…… Art HollidayDirector, JOHNNIE BE GOOD