Everyday statements about karma like “you get what you give” or “what goes around, comes around” are another way of saying Johnnie’s immense talent, his respect in the music industry, his humility, and his willingness to mentor younger musicians, are a big part of the reason JOHNNIE BE GOOD is succeeding beyond my dreams for the film. This isn’t false modesty; I’ve worked my ass off for six years. But some of the great things that have happened to this project can’t be explained, just enjoyed. 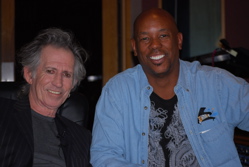 My most recent road trip to NYC in November resulted in my most important interview, Keith Richards. Karma? Guitar legend Hubert Sumlin just happened to be in NYC during my visit, so it was a two for one roadtrip: Keith Richards, who was largely responsible for the rediscovery of Johnnie in the late 1980’s; and Hubert Sumlin, who recorded with Chuck Berry and Johnnie in 1957 at Chess Records. Sumlin was in the room when rock and roll history was being made.The kindness of strangers: A woman named Kathy who showed me a condo for sale a couple of years ago, recently followed up with an email and asked how the documentary was progressing. I replied that I was trying to get an interview with Paul McCartney. Kathy said she had a friend in California, Lou, with connections in the music business and told him about JOHNNIE BE GOOD. Lou emailed several days later to say he had a friend who was connected to Paul McCartney’s manager. Eventually his connection led to a formal interview request and I’m waiting on a response. Luis later emailed to say he has another friend, Virgal, who is friends with Tina Turner’s family. Turns out Virgal is a first cousin of one my aunts. Karma? You be the judge.

I did a radio interview in St. Louis, and a listener left a phone message for me, indicating he might be able to help with the documentary. He turned out to be an employee of Apple Computer who donated a brand new computer to edit JOHNNIE BE GOOD. Karma, baby!Two Tickets To Paradise: I requested an interview with Eddie Money when he visited St. Louis because I am a fan. I planned to ask some generic rock and roll questions. It turned out that Money was a HUGE Johnnie Johnson fan, saying Johnnie was the greatest rock and roll piano player who ever lived. It was a fluke that I asked for the interview…and the karma of JJ. The Cavern Club: Lindenwood University professor Peter Carlos introduced me to British actor Malcolm McDowell, and mentioned that I was a filmmaker. McDowell asked what film I was working on. When I told him, he recalled visiting the legendary Cavern Club in Liverpool in 1962 where he saw The Silver Beatles performing Chuck Berry songs. That’s how I got my interview with McDowell about witnessing firsthand the influence Berry and Johnson’s music had on the early Beatles. JJ Karma.

George Turek, a great friend of Johnnie Johnson, emailed a few months ago to say he had just purchased a jet and beginning in 2010, if I need to travel to an interview, his jet is at my disposal. Wow. The karma of Johnnie Johnson on steroids!I haven’t even mentioned the great friends I’ve made like Dona and Vivian Oxford, hall of famer Bob Weir coming to my house, or the day in Columbus, Ohio when I had just interviewed drummer Steve Jordan and up walked his bandmate Eric Clapton for an unexpected introduction to Slowhand. Clapton accepted my interview request on the spot.The first goal in 2010 is to finish the first rough cut. So far editor Jon King and I have edited about an hour, roughly one third of the first version of the film. Then we start trimming material and making some of the creative and editorial decisions about the look and feel of JBG. Then, I start shopping for a narrator. As I write the script, I’m revisiting interviews that I did three, four years ago, reminding me how good Taylor Hackford, Chuck Leavell and many others were, commenting about Johnnie. I have the makings of an exceptional film…and miles to go before I sleep. If 2010 includes a yes from Sir Paul McCartney, I’ll know for sure that Johnnie continues to sprinkle his own brand of fairy dust on JOHNNIE BE GOOD! Can’t wait till tomorrow ’cause JBG gets better lookin’ every day.The journey be good….Happy New Year everybody!Art Holliday